In addition to the food, medicines, clothing, goods and services, the Sejour family has provided to the needy and grateful people of Haiti. There are contributions of a Spiritual nature that should not be overlooked.

In 2011, in the midst of a crusade service in Tombe Gateau, Leogane, Haiti, Deacon Jean Sejour was preaching in a local church. After several minutes it became apparent to him that there were many young women in the congregation that had small children with them. Seeing no men beside them, Deacon Sejour asked the young Mothers to please come forward and join him in the center of the Sanctuary.

The Lord spoke to Jean’s heart at that moment and he announced to the young ladies that he would return next year and any young woman that had a mate and wanted to be married would be joined in Holy Matrimony.

That ended the mission for that year and Jean and his family returned to America. Once back in America and while reporting to the church the events that transpired in Haiti, Jean mentioned the unwed mothers and and his promise to them. He asked the congregation for their prayers and support in his mission of marriage. The response was miraculous.

In a spirited effort and in less than 90 days, the Saints of Immanuel’s Church had collected more than 40 gowns for the women and over 50 suits for the men. The vast majority of the clothing being brand new!

That was the beginning of a whole new movement in mass Matrimony as upon his return to Haiti in July of 2012, Deacon Jean, true to his word, married 20 couples at the same time and for the first time for them. The following day, two people from the wedding party accepted Jesus Christ as their Lord and Savior. Praise be to God!

Genesis 2:24 – Therefore shall a man leave his father and his mother, and shall cleave unto his wife: and they shall be one flesh

Word quickly spread and soon the Deacon was being approached by people from other localities asking him to perform mass weddings at their respective churches. Jean always worked side by side with the Pastors of those churches where the weddings took place.

Two years later in 2014, 28 couples were wed in a mass ceremony with the newlyweds ranging in age from 22 years old to 84 years of age! There was no religious restrictions set on anyone. Believers and non-believers alike were welcomed to be married.

It should be noted that everything necessary to perform these weddings was provided by Deacon Jean and the good people of Immanuel’s Church of Silver Spring, Maryland. They provided the wedding gowns for the Brides, the new suits for the Grooms and even the wedding rings used to unite them in Holy Matrimony.

Unfortunately, providing food for the Receptions proved to be an uphill task as hungry people came from all over who heard food was being served. At times, the Receptions had to be canceled due to the lack of food for so many. While no one was turned away, it became evermore challenging to feed those hungry masses.

Due to the expense, only mass weddings are performed at this time. Generally, there are between 20 to 30 couples getting married at each ceremony. That’s a lot of suits and gowns and rings!

Jeremiah 30:17 For I will restore health unto thee, and I will heal thee of thy wounds, saith the Lord;

Heading up evangelical crusades is a daunting and rewarding task. During these crusades Jean has witnessed the conversion of sinners to Saints and has seen firsthand, the power of the Holy Spirit at work in his Ministry.

Countless people received healing and comfort from all types of maladies from simple headaches to Demonic possession. On more than one occasion Demons were expelled from those seeking the healing Hand of God. Praise be!

ean also was moved to organize and set up medical missions where people came to clinics to receive medicine and treatment at no charge to them. Before departing, it was mandatory that the recipient of medical treatment agree to be prayed for by our gifted and well trained intercessors to assist in spiritual and physical healings. And healings occurred.

Last year during a street Crusade they came upon a man who could neither see nor hear. Hands were laid upon him along with heartfelt prayer right there in the middle of the street. When they were finished praying for him the man could hear. Praise be to God!

Missions of mercy are a way of life with the Sejour family and with God’s helping Hand, will continue to be so. 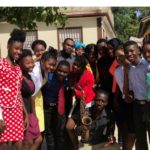 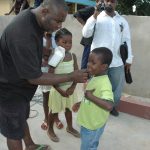 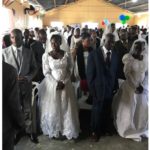 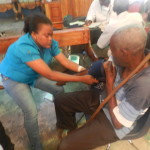 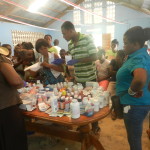